Technology:
Shin-EtsuChemical developed a new material that increases the capacity of lithium-ion battery by up to 10 times. It is a sheet-like material inside lithium-ion battery used to store electricity. The material is currently made of a carbon-based material, but the company used silicone instead by utilizing the technology it has accumulated in the development of semiconductor wafer. Silicone is considerably higher in price than the carbon-based material, but the former can store 10 times more electricity than the latter. The new sheet-like material increases the operating time of a smartphone in addition to creating the possibility to make it smaller.

Shin-Etsu Chemical has already started to ship samples to battery manufacturers both at home and abroad. It will solve such problems with mass production as production cost and deterioration due to deformation in collaboration with them. Mass production is scheduled to start in three to four years. Hitachi Chemical is developing a technology to increase the capacity of lithium-ion battery by using an alloy. Sumitomo Osaka Cement is also involved in the development race. Japanese companies has 50% share in the world market of materials for lithium-ion battery. A Japanese research firm estimates that the world lithium-ion battery market will increase 50% from the level in 2012 to 1,700 billion yen in 2017. In the world, 700 million smartphones are shipped annually, and demand for a smartphone with a larger capacity is growing as more and more people use it instead of a PC on business. The new system works in concert with the electricity distribution system of an electric power company and automatically selects stored electricity when a power outage occurs. Because the new system stores electricity using a power grid, it is theoretically possible to cover a town entirely. Even though residents cannot use electricity as much as they want, the new system is expected to eliminate the anxiety of residents living in a devastated area. The introduction cost is estimated between 100 and 300 million yen for every 100 households. Mitsubishi Electric has already started experiments in several plants. The company plans to complete the system by next April and sell it to electric power companies and local governments.

Posted by Senryaku-kenkyu at 11:50 PM No comments:

Technology:
NEC developed a self-advancing robot to diagnose such defects as crack and falling inside sewerage pipes. It automatically analyzes videos it shoots with the mounted camera and pinpoints the part likely to cause an accident like falling. Developed by NEC in alliance with Japan Sewage Works Agency, it will be usedfor the inspection of the inner part of sewerage pipes less than 80 cm in diameter. NEC applied the know-how it accumulated in pattern recognition for face and fingerprint authentification to the development of this robot.

The newly-developed robot can collect image data of a pipe line of 1 km in six hours, while the existing method that inserts a camera inside a sewage pipe can get image data up to 300 m in six hours. Japan has a total of 440,000 km of sewerage pipes, more than 20% of which are rather obsolete and supposed to have a risk of falling. The new robot will be provided to a half-year experiment toward this autumn. After the experiment, it will be put into practical use.

Posted by Senryaku-kenkyu at 11:42 PM No comments: 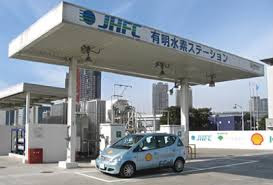 
The latest technology of a hydrogn station

Posted by Senryaku-kenkyu at 7:31 PM No comments: 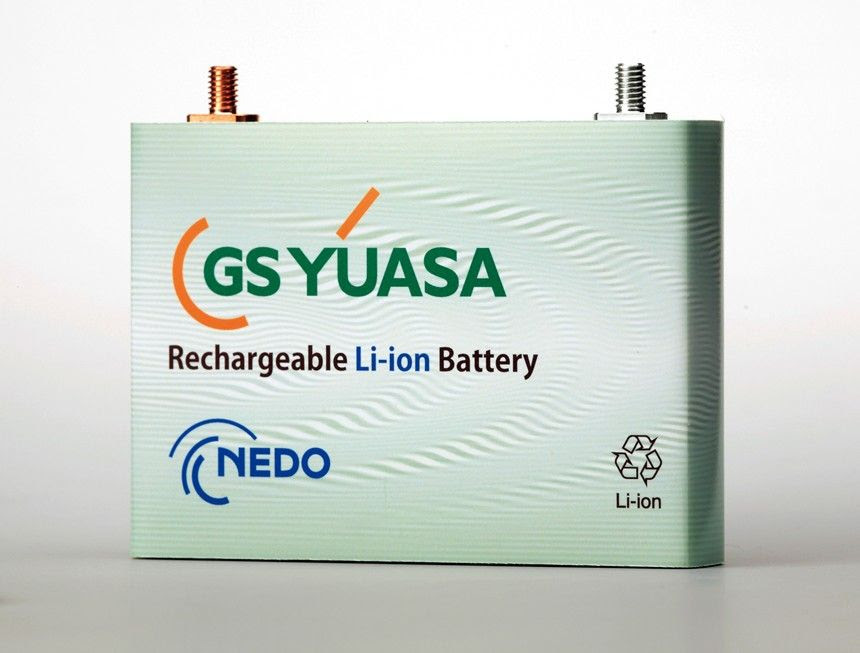 Professor of Tokyo University of Agriculture and Technology Katsuhiko Naoi and Nippon Chemi-Con jointly discovered that adding fine particles of nanometer size to electrode materials increases the storage capacity. Each nano particle is five to several tens of nanometers in diameter. They created these nanoparticles by reacting carbon and a metal oxide under high pressure. Used as additives, they get into the clearance between particles of electrode materials to increase the density, subsequently the storage capacity increases. It has already been conformed that adding nanoparticles to various kinds of electrode materials increases the storage capacity by 25-30%. The existing production line of lithium-ion battery can also introduce this new technology with only a minor modification. Nippon Chemi-Con already started shipping samples.

The above two technologies support the government’s plan to increase the travel distance per charge of an EV by three times to 500 km by 2030. Japan currently has nearly 50% share in the world market of materials and components for lithium-ion batteries.


The latest model of the lihium-ion battery

Posted by Senryaku-kenkyu at 7:36 PM No comments:

Technology:
Jet fuel can be produced only in the purification process of crude oil at a constant rate, though it will be in greater demand with the spread of jet travel. Its price has been increasing since 2000 at 12% annually on average to about 100 yen per liter today. Because the number of aircraft will supposedly double to 35,000 planes in 20 years, it is urgent to develop a technology to produce less expensive of jet fuel. Currently, it is allowed to add biofuel to jet fuel up to 50%. Corns and sugarcanes are used to produce biofuel, but they are subject market fluctuations.

Algae are supposed to be hard to culture in large amounts. However, IHI developed a technology to mass produce alga-based biofuel for up to 50% of the volume of algae by utilizing its plant technology. The company has already succeeded in reducing the production cost of algae-based biofuel to 500 yen per liter, half of the cost to produce standard biofuel made of plant seeds. In order to reduce the production cost to 100 yen per liter, the company plans to build a plant in Southeast Asia or Australia to make the best use of long hours of sunlight vital to the photosynthesis of algae. Because fuel cost accounts for 40% of the operation cost of airlines, lower jet fuel helps them to improve profits. U.S. ventures take the lead in research and development of biofuel, but none of them established the technology for the mass production of biofuel.

Biofuel made of algae

Posted by Senryaku-kenkyu at 8:19 AM No comments:

Sony will provide an energy-saving service to shops and offices that utilizes the artificial intelligence technology contained in its self-developed robot AIBO (friend in English). The service will monitor the power consumption of every electric appliance in an office and shop. Users can know the wasteful operation in one glance and work out finely-tuned measures for energy saving. At present, all energy-saving services can monitor power consumption of the entire office and shop. (Photo: Sony's AIBO, Please note AI means artificial intelligence.)

A sensor built in the power distribution board automatically figures out the status of use of each electric appliance independently with the help of the pattern recognition ability that the company has accumulated in the course of developing the AIBO. Real-time and independent monitoring of each electric appliance makes it possible to know the most appropriate arrangement of electric appliances not to mention that even better measures for further energy saving can be implemented. Informetis will market this new service with financial assistance from a domestic fund.

Posted by Senryaku-kenkyu at 12:09 AM No comments:

Technology:
Agricultural machinery makers are launching various products and services to help farmers strengthen their competitive edge in anticipation of increasing competition due to the liberalization of the farming market.

Yanmar will launch a GPS-based service that allows farmers to confirm the operation of farm machinery and yields in alliance with Sorimachi, an accounting software developer. Yanmar tractors loaded with GPS automatically record their operations, and farmers input weather conditions and yields to Sorimachi’s software and send the data to Sorimachi’s database. The new service by Yanmar and Sorimachi allows farmers to know maintenance timing and get detailed information on yields by areas. Farmers get this service for free until March 2014. Yanmar plans to sell this service to 75,000 large-scale farmers, about 30% of all large-scale farmers in Japan.

A Yanmar tractor in operation

Kubota developed a machine to produce unhusked rice for direct seeding. The new machine creates a metal film of less than 1.0 mm thick on seed rice using high-security iron powder Kubota developed for agriculture. Seed rice with a metal film on it is buried under the ground to prevent it from being devastated by birds. Farmers can produce enough amount of seed rice for direct seeding for a paddy field of about one hectare in 30 minutes. Direct seeding is not widespread in Japan, and this is one of the reasons for the high price of Japanese rice. The new machine will be put on the market for 630,000 yen.

Agricultural machinery makers are busily occupied with the development of new services and machines to increase productivity because Japanese agricultural production is on the decline after it peaked at 700 billion yen in 1986 largely because of aging of farmers.

Posted by Senryaku-kenkyu at 7:29 PM No comments:

Technology:
The measuring method of CO2 emissions that Japan proposed under the initiative of the Japan Iron and Steel Federation (JISF) was approved by International Organization for Standardization (ISO) as a new standard. The new standard, ISO14404, specifies the calculation method of CO2 emissions by steel plant and figures in energy-saving facilities that generate electricity using waste heat and by-product gases emitted by blast furnace as the subject for measurement. Currently, it is widespread in Europe to measure CO2 emission by facility, such as blast furnace, converter, and coke oven, but the method to measure by facility cannot consider fully the efforts to introduce energy-saving facilities inside a steel plant. That is, the European model does not take energy saved by effective utilization of newly-introduced facilities into account.

Japan submitted its self-developed calculation method to ISO in 2009, and the Japanese method was finally approved this year. It is evaluated highly because the effect of energy-saving facilities can be calculated easily. With the Japanese method in mind, Japanese steelmakers are proposing the generation facilities that utilize waste heat to newly-industrialized countries like India. It is highly likely that measuring CO2 emissions by facility will stimulate demand for energy-saving technology in steelmaking worldwide. 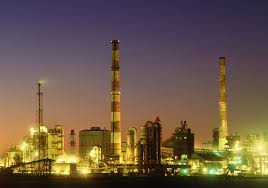 The Japanese method to measure
CO2 emissions was approved by ISO.

Posted by Senryaku-kenkyu at 7:50 PM No comments: