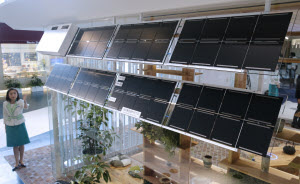 
Panasonic will conduct research to increase the generation efficiency of hydrogen in alliance with New Energy and Industrial Technology Development Organization (NEDO) and Kyoto University. Niobium is abundant and relatively free from price fluctuation as compared with silicone, and its supply is more stable than silicone. Besides, the mechanism to generate hydrogen is simple, opening the way to generate hydrogen at low cost. The company plans to generate sufficient amount of hydrogen to supply energy for household use, excluding energy for vehicle, by hydrogen alone using panels on the house roof. Panasonic wishes to put this technology into practical use by 2030.

Posted by Senryaku-kenkyu at 12:01 AM No comments: