No. 875: IT companies accelerate development of technologies to prevent crimes and terrorist activities (April 23, 2015)

Technology:
Major IT companies are accelerating their efforts to develop technologies for anticrime measures toward the Tokyo Olympics in 2020. Hitachi developed a technology to detect a person who handled an explosive when he passes through the ticket gate of railway stations, and NEC developed a system to pinpoint a suspect while monitoring the city streets by combining image processing technology and security camera and put it into practical use.

NEC developed a crime-prevention system that can monitor the whole city using NEC’s high precision image recognition technology. NEC’s system has the world highest precision of image recognition technology, and it can recognize a face at such a high success rate of 96%. The company has already shipped the system to Tigre, a resort northwest of Buenos Aires in Argentine. The system shipped to the resort has 1,000 cameras to cover an area of 150 square kilometers, and it works with the database of the police department. The system is managed by a private security company, but the police department dispatches police officers as soon as it receives a report from the security company. It has the function to detect the number places of stolen cars.

A research company in Japan estimates that the world market of image processing system will grow to 70 million yen in 2017.

Posted by Senryaku-kenkyu at 5:25 PM No comments: 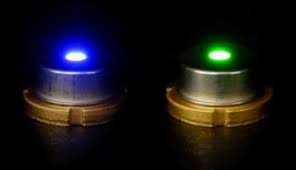 
The element is made of gallium nitride and 1.2 mm long. A cover or a terminal is used to create laser light. Nichia successfully allow a semiconductor laser to emit strong light by improving the structure of the semiconductor element. Because a laser light has a uniform wavelength and can be emit straight. Therefore, it permits more effective illumination than an LED should it be employed for the backlight of the monitor of liquid crystal TV, and power consumption of the monitor will be halved.

Posted by Senryaku-kenkyu at 9:05 PM No comments:

Technology:
The National Institute ofInformation and Communications Technology and Tokuyama Corp. jointly developed an LED that emits 10 times stronger deep ultraviolet than the existing LED. Ultraviolet is highly effective in sterilization. They used a gallium nitride material that was used by blue LEDs awarded by the Noble Physics Prize in 2014. The newly developed LED can kill nearly all germs within a 10 cm square area in one second. They plan to commercialize it by 2020 for sterilization as well as for the treatment of skin diseases. 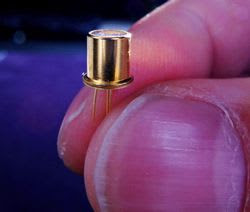 The newly developed LED allows a 0.1 square mm element to emit up to 90 mw, whereas about 10 mw is the maximum under the current technology. In addition to gallium nitride, they used aluminum nitride for the substrate. They lined up bumps, each of which is 500 nm wide, in an orderly manner on the substrate surface to allow deep ultraviolet to get out easily.

Deep ultraviolet is ultraviolet whose wavelength is between 200 and 300 nm. Although it is contained in sunlight, it hardy reaches to the ground because it is mostly absorbed in the ozone layer.
Further details are available here (in Japanese).
You can read the details of this newly developed LED in Applied Physics Letters.

Posted by Senryaku-kenkyu at 5:54 PM No comments:

Technology:
Toshiba established a research center to develop a system to produce hydrogen energy that controls the emissions of carbon dioxide. It plans to put a large-scale system that covers from hydrogen production to power generation into practical application toward 2020 well ahead of its competitors. Named “Hydrogen Energy Research and Development Center,” it was established inside Toshiba’s Fuchu plant in the suburbs of Tokyo.

The existing technology inevitably produces carbon dioxide in the process of taking out hydrogen from oil. The company plans to develop a system that eliminates the possibility of producing carbon dioxide in the production process of hydrogen. It plans to produce hydrogen by dissolving water with the help of photovoltaic generation. The hydrogen will be stored in special equipment and used for power generation by large-scale fuel cells. The generated power will be delivered to households. The company plans to develop a system capable of generating power for 10,000 households by 2020. Toshiba’s planned integrated hydrogen system that covers from hydrogen production to power generation will be the first system of this kind in the world. Toshiba plans to increase hydrogen-related sales from 20 billion yen in 2014 to 100 billion yen by 2020.

Japanese high-tech companies are accelerating the efforts to develop new technologies in the field of hydrogen. Mitsubishi Hitachi Power Systems will put a hydrogen turbine that reduces greenhouse gas emissions in 2017, while Kawasaki Heavy Industries will start ocean shipping of hydrogen toward 2017. The world hydrogen-related market is estimated to grow 160 trillion yen in 2050.  A pdf file for further information (in Japanese)

Posted by Senryaku-kenkyu at 5:43 AM No comments:

No. 871: Reducing oil consumption for resin production with the help of coliform (April 16, 2015)

Technology:
Genaris, Inc., a bio-venture company in Yokohama, is conducting research on using coliform to produce materials for semiconductors and PET bottles. This project is capable to changing drastically the energy situation in 2050. In this project, researchers are producing industrial materials from waste PET bottles with the help of coliform on trial. In the laboratory, special equipment stirs up milky liquid in a beaker, and the liquid in the beaker becomes brown in several hours. That is, coliform in the beaker got active and started to create a new substance.

Waste PET bottles can be used to produce such products as fiber. However, rumps like waste liquid are produced in the process of recycling waster PET bottles. In the rumps, major substances of PET bottles still exist. The research members are trying to instill the ability to resolve these major substances into coliform by manipulating coliform genes. They plan to use the resultant substances as raw materials for semiconductors and PET bottles.

Oil consumption for resin production can be reduced to one tenth should the recycling method that uses coliform be established. The company is confident that it is possible to produce raw materials equivalent to oil-derived raw materials with the help of plants and coliform. Coliform cannot be free from a bad image because it causes food poisoning. However, coliform is mostly harmless, and its genes can be manipulated easily because it is a single cell. Researchers are trying to change coliform to super coliform equipped with various abilities. 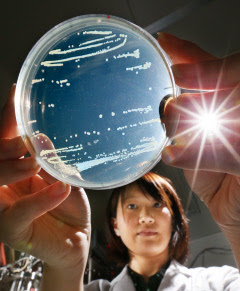 A researcher is woking on rumps produced
in the process to recycle PET bottles.

Posted by Senryaku-kenkyu at 3:03 AM No comments:

Technology:
NEC developed a technology to reduce the data amount of IoT that has been increasing rapidly to one tenth. The company plans to start the substantiative experiment of this new technology within the year. IoT connects various devices like vehicles, industrial machines, and wearable healthcare terminals, and it is required to solve problems caused by rapidly increasing data amount.

The new technology can tell the difference between vehicles that travel over a wide range and electronic appliances that are used inside the house. The server studies the change of position information and communication frequencies and transmits only required amount of data with the best possible timing. For example, the new technology takes out heart rates from a sensor frequently, while it lengthens the measurement interval of equipment that examines the deterioration of bridges and tunnels. The data trading method became the standard of 3GPP that is the international standard project of mobile communication.

IoT will connect more than 25 billion devices in 2020

NEC said, “This new technology will play an important role in IoT’s info-communication infrastructure and accelerate the provision of various solutions for such fields as traffic, energy, logistics, and medical treatment and healthcare. We will continue our utmost efforts for the development and practical applications of networks to build a secure, safe, efficient, and impartial social infrastructure.”
Posted by Senryaku-kenkyu at 8:47 PM No comments:

No. 869: The Tokyo Olympics is the place to exhibit Japanese state-of-the-art technologies (April 14, 2015)

Technology:
A total of 1,000 Japanese high-tech companies are expected to participate in the project proposed by the Japanese government to exhibit Japanese state-of-the-art technologies in conjunction with the Tokyo Olympics scheduled for 2020. The Council for Science, Technology and Innovation affiliated with the Cabinet Office of the government will start recruiting public companies for the project by the end of April. The project covers nine fields: automated driving, automated translation, hydrogen society, assisting disabled people, weather forecast, monitoring system, imaging technology, injection surveillance, and long-lasting plants.

The Tokyo Metropolitan government will introduce the next-generation city traffic system that permits interactive communications between vehicles and traffic lights for automatic traffic management. The bus rapid transit (BRT) will be introduced for the means of transport between the city center and the Olympic arenas. The traffic light will turn green as a bus approaches for on-time operation, and the bus stops at a bus station in centimeters and as close to the station as possible to let users of wheelchairs and baby carriages get on and off without any difficulty. The terminal of the speech translation system that supports several languages including English, Chinese, and Arabic will be available at airports, arenas, and sightseeing spots.

In the field of hydrogen society, hydrogen produced by the electricity created by renewable energy across the country will be transported to Tokyo by large tankers. The hydrogen will be stored in hydrogen stations in Tokyo and used for fuel-cell vehicles plying between the city center and Olympic arenas. A monitoring camera system based on sophisticated analysis technology will be developed to pinpoint suspicious individuals and sick people promptly. To prepare for patients with an infectious disease, detection technologies and systems for information collection and analysis will be developed. Support robots to help disabled people watch Olympic Games and assist Paralympics athletes with their training will be developed. A weather forecast technology to forecast torrential rainfalls and a biotechnology to allow flowers to live longer in summer will be developed.

Posted by Senryaku-kenkyu at 9:19 PM No comments: