Technology:
Denso and Institute for Molecular Science developed a new spark plug that ignites an engine using laser. It has higher combustion efficiency than the conventional spark plug and can improve fuel efficiency of vehicle and gas engine for power generation. The newly developed spark plug has the same size of the conventional electric spark plug. The research team led by Takunori Taira incorporated ceramic crystals that emit high-power laser intermittently reacting to incoming semiconductor laser. Denso and Nippon Soken jointly confirmed that the new spark plug is applicable for continuous running of an engine.

The new plug can be mounted in a gasoline engine of vehicle, but it will be two times more expensive than the conventional spark plug even if it is mass produced. Therefore, it will be applied to generators for cogeneration used in the plant and building for the time being. Because laser spark plug has excellent ignition performance than the conventional spark plug, a vehicle engine and a cogeneration generator can improve fuel efficiency by 30% and 10%, respectively. The research team wishes to put the new spark plug into practical applications in a few years. Exterior of the microchip laser

Business trend:
JX Nippon Oil andEnergy opened a gas station that supplies both gasoline for gasoline vehicles and hydrogen for fuel cell vehicles for the first time in Japan. This gas station does not have equipment to charge for hydrogen, and it is used for a substantiative joint project by the company and New Energy and Industrial Technology Development Organization (NEDO). A special tank truck delivers high pressure hydrogen to the station. Through the repetition of filling hydrogen to demonstrative fuel cell vehicles, the project team examines the problems with downsizing the system.

Hydrogen is easy to transport and store besides being a highly efficient energy source. Toyota and Honda are scheduled to put fuel cell vehicles on the market in 2015, and JX Nippon Oil and Energy plans to open 40 gas stations of the same kind by 2015. The company wishes to accumulate practical accomplishments of safety operation of the dual supply system and establish the hydrogen supply business at an early date. 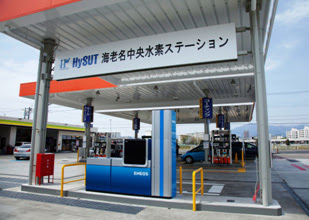 A station that supplies gasoline and hydrogen

Posted by Senryaku-kenkyu at 8:04 PM No comments:

The company is developing the evaporation method that sticks organic EL materials evaporated in vacuo on the substrate, and it is simultaneously developing the printing method that applies EL materials to the substrate like ink-jet printer with Seiko Epson. The evaporation method is one step ahead of the printing method, but the former produces more defectives than the latter. The latter requires less production cost than the former, but it has the problem with lengthening the life of materials.


Introduction of Tokyo Electron
Posted by Senryaku-kenkyu at 7:48 AM No comments:

Technology:
Konica Minolta developed organic electroluminescence (EL) lighting as thin as a sheet of paper. Because it is soft and bendable, it can be pasted on various places. The company wishes to put it into practical use by increasing its brightness to the level comparable with light-emitting diode (LED) and stick on the ceiling of trains and vehicles in several years. It also plans to propose new applications such as shining columns and windows.

The newly-developed organic EL is made of three layers of organic materials that shine blue, red, and green respectively when voltage is applied, and the tricolor lights mix and irradiate incandescent light. The initial product is 6 cm wide and 15 cm long, and it is bright enough to tell that it is shinning in a bright room. The company built an organic EL thin film and an electrode on a soft plastic substrate by two production methods of the evaporation method and application method. At the present stage, it is darker than LED lighting that is currently growing popular rapidly, but the company is sure to make it brighter by improving the materials and manufacturing process. Organic EL lighting is expected to spread substantially in 2015.

Posted by Senryaku-kenkyu at 7:30 PM No comments:

The company will focus on the mega solar with an output of several mega watts per hour. A set of photovoltaic generation system with an output of five mega watts that incorporates redox flow batteries will be about 1,000 million yen. At present, lead batteries are widespread, but demand for small high-performance lithium-ion batteries will expand in the domestic market. A lithium-ion battery needs maintenance to prevent thermal runaway in addition to a life that is about 10 years at the longest. The company set up a division staffed with about 30 engineers exclusively for the development of redox flow battery in Osaka. In the initial stage, the company will invest 800 million yen to establish a mass production technology to produce a separating membrane that separates electrolyte into the positive electrode and negative electrode.

Posted by Senryaku-kenkyu at 6:18 PM No comments:

No. 703: A substrate glass with dramatically decreased heat shrinkage (April 6, 2013)

Technology:
Nippon Electric Glass that became independent of NEC in 1949 developed a substrate glass suitable for high-definition liquid crystal panels called 4K and 8K. The new substrate glass decreased the heat shrinkage to less than one tenth. It will allow panel producers to boost yield. The company will establish a mass production system shortly. A liquid crystal panel is built by attaching a film to a glass substrate. In the case of the high-definition liquid crystal panel, the glass mostly is heated to higher than 600 degrees centigrade. The heat treatment is liable to generate shrinkage that cannot be modified even in the post-process. The company solved the problem by reviewing raw materials and cooling glass down gradually in the molding process.

The company has started to ship samples of about one meter square. It wishes to get the first order within the year. It has already laid down a plan to start mass production in its two plants in Shiga Prefecture. The amount of capital investment is not announced. Nippon Electric Glass lately faced the decreasing profitability because of the decreasing prices of flat-screen TVs. The company wishes to recover the profitability by taking the initiative in the substrate glass for high-definition TVs. Nippon Electric Glass has a share of 20% in the world market of substrate glass for liquid crystal panels.

A super thin board from Nippon Electric Glass
Posted by Senryaku-kenkyu at 1:35 AM No comments:

Technology:
Fujitsu Laboratories, a subsidiary of Fujitsu, developed the next-generation information equipment that allows you to operate intuitively using your fingertip. A print medium like pamphlet is put under a read-only camera. When you go over a keyword in the print medium with your finger, the equipment automatically searches relevant information on the Internet and displays it on the print medium. You can prepare materials and pamphlets of your own with only your fingertip in a short time.

Currently, a special high-resolution camera is necessary to trace the moves of fingertip precisely. Fujitsu Laboratories developed a recognition technology that can trace the moves of fingertip with the help of information on the color and shape of fingertip. Thanks t the new technology, a web camera can replace a special high-resolution camera. You can move the displayed information freely using your fingertip to realize a layout of your choice. In the initial stage, the new equipment will supposedly be in demand for preparing product descriptions and conference materials. Fujitsu Laboratories plans to put it into practical use in 2014. Click here for further details (in Japanese). New equipment for easy preparation of

Posted by Senryaku-kenkyu at 8:06 PM 2 comments: