No. 830: Japanese technology involved in the IC transit card increases the presence in Southeast Asia (January 28, 2014)

Technology:
The Japanese government will export the payment system that uses IC cards to Vietnam coming May as part of its official development assistance (ODA). A total of 200,000 IC cards complete with necessary equipment will be provided to Vietnam for users of route buses in Hanoi for free. The IC card to be exported is Sony’s contactless IC card Felica. Japan International Cooperation Agency collaborates with Sony, NTT Data, and Dai Nippon Printing. The total investment is expected to be 100 million yen all of which will be paid by ODA. In the initial stage, 26 buses travelling about 30 km from north to south inside Hanoi will accept the IC commuter ticket service in June. When the IC commuter ticket service spreads enough, the prepaid system will be introduced. Local production of IC cards will start in May, and the toll collection system and card readers will be installed at the same time.

The Japanese government plans to expand the market of Japanese IC transit cards to Thailand and India. Hong Kong, Bangladesh, and Singapore have already introduced the Japanese IC transit card system. There are several IC card specifications for public transit in the world. As compared with the Type A widespread in western countries, the Japanese IC card has a built-in chip higher in performance and needs less time for reading at the time of payment. In addition, it can store more information and easily support transfer. Once the Japanese system spreads in Asia, Japanese can move and shop easily during their stay in Asia and the market of IC-card supporting products including buses, rolling stocks, and vending machines will expand. The Japanese government plans to increase exports of infrastructure to 30 trillion yen by 2020.

Automatic ticket gates of JR East
Posted by Senryaku-kenkyu at 6:13 PM No comments:

Technology:
Itoen, unquestionably Japan’s leading maker of green tea products, will introduce an IT-based system to increase the quality of its products. The company will install special sensors in tea plantations and manage the growth of tea leaves by combining the data sent by the sensors with the images coming from an artificial satellite to know the most appropriate time to pick the tea leaves. Irradiating tea leaves around with light of a special wavelength, the sensors detect and digitalize their growing degree and tint. The images coming from the artificial satellite are used to manage the whole of a tea plantation. The special sensor is the same size as a security camera, and Itoen plans to install about 10 units in every 100 hectares. 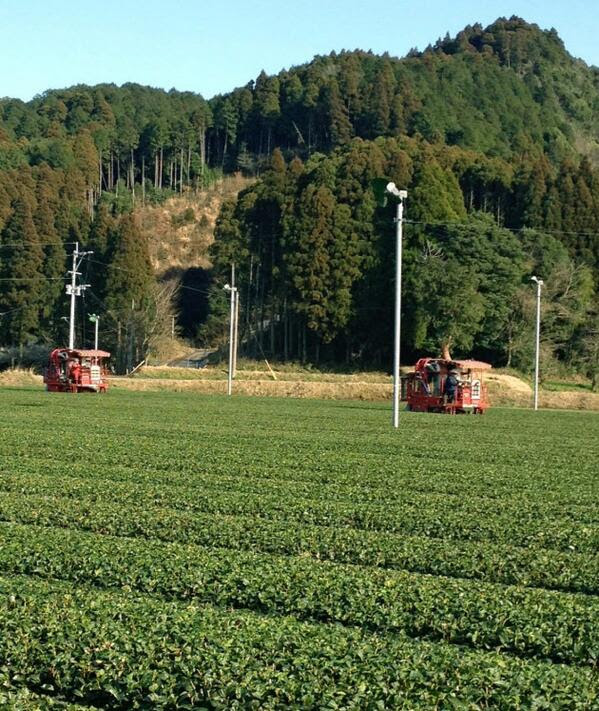 Sensors installed in a tea plantation

Itoen has been developing this system in alliance with Nagasaki University, and the system will be put it into full scale operation in 2016. It will supposedly cost 10 million yen to install equipment of this system, but the investment can be recouped in a few years. Besides increasing the quality of tea leaves, utilizing IT will increase crop yields and eliminate the necessity of seeing around tea plantations. The personnel cost will be reduced to a quarter of the current level. Itoen currently procures nearly 90% of tea leaves it demand from the market and plans to decrease the share to 60% by increasing the contracted tea plantations that introduce the IT-based system. This approach will enable Itoen to stabilize the raw material cost, strengthen the traceability, and launch tea products that use only a specific tea plantation for consumers sensitive about taste and flavor.

The Japanese government has already announced the plan to integrate abandoned fields to increase the productivity of Japan’s farm products. This government drive is expected to facilitate the spread of an IT-based system in the agricultural industry. The happiest moment given by a cup of green tea

Posted by Senryaku-kenkyu at 7:35 PM No comments:

No. 828: Development race of the automatic braking system is intensifying (January 26, 2014)

Technology:
Honda developed an antipersonnel brake system to stop a vehicle traveling at 60 km/h automatically for the first time in the world. Honda’s automatic braking system is equipped with a high-precision system that detects a pedestrian. Using a milimeter wave radar and high-resolution camera, it identifies a pedestrian precisely at an earlier stage and activates the brake. Honda plans to install the new automatic braking system on its high-end sedan Legend within the year.

Posted by Senryaku-kenkyu at 5:40 PM No comments:

The new technology will allow JX Nippon and Oil Energy, the core company of JX Holdings, to produce hydrogen and liquefy it by dissolving it in toluene, and allow trailers to transport liquefied hydrogen to hydrogen stations at normal temperature and at normal pressure. At present, gaseous hydrogen is compressed at high pressure and transported by special trailers. Liquefying hydrogen eliminates the necessity of high-intensity carbon fiber cylinders and equipment to prevent explosion. In addition, trailers used to transport gasoline and tanks used to store gasoline will be diverted for the transportation and storage of liquefied hydrogen, and the construction cost of a hydrogen station will be reduced half of the current level to 200 million yen. At the same time, it will be possible to double the transportation amount by reducing the cubic volume.

The cost to produce and distribute hydrogen is currently 145 yen per cubic mete, and it will supposedly go down below 100 yen when a low cost distribution system based on the new technology is established. Increasing the number of hydrogen stations and to increase hydrogen production is expected to reduce the cost to 60 yen in the future. JX Holdings has now 11,100 affiliated gas stations, about one third of the total gas stations in Japan. The company plans to increase the number of hydrogen station to 40 by 2015 and spread the hydrogen distribution network extensively after 2020. Chiyoda is also developing a technology to liquefy hydrogen by toluene. The competition of technological innovation to spread fuel-cell vehicles is heating up.


The future to be realized by hydrogen stations

Posted by Senryaku-kenkyu at 5:43 PM No comments:

Technology:
Nitto Denko is developing a medical device to administer medicine through skin by radio waves instead of a needle. The company has started joint research on the administration of insulin and antibody drug through skin with several pharmaceutical companies both in Japan and the U.S. The device makes about 200 tiny openings into the skin per square centimeter by adding heat on it using radio waves, and a sheet containing drug substances is stuck to these openings. A patient hardly feels pain and heat. Nitto Denko plans to put the device on the market toward 2020 as a device that a patient can use by himself at home.

3M of the U.S. has already started the clinical trial of the treatment that uses microneedles for postmenopausal women suffering from osteoporosis. The microneedles do not give pain to a patient, and drug substances can be administered in five minutes. Daiichi Sankyo and Terumo are scheduled to launch a vaccine that uses microneedles in 2016. Fujifilm and Nichiban are also developing medication using microneedles. As the graying society develops, demand for easier and painless medication is growing stronger. It is estimated that the world injection market will grow at 14% per annum after 2012 to 4,300 billion yen in 2017.

Posted by Senryaku-kenkyu at 5:31 PM No comments:

Technology:
Thermoelectric generation that changes heat to electricity with the help of temperature difference attracts wide attention. NEC and NEC Tokin developed an element by applying the physical phenomena called the spin Seebeck effect discovered by EijiSaitoh of Tohoku University. They adopted a bendable thin resin for the substrate of the element and built a magnetic film by spraying a solution that contains nickel, zinc, and iron. And they attached a metal film on the magnetic film to build a sheet-like thermoelectric conversion element that is about 30 micrometers thick and several millimeters vertically and horizontally. They confirmed that electric current flowed along the metal film should temperature difference exists between the front and back of the element.

Although the new element has the same generation efficiency as the existing elements, it does not need a complicated production process: the spray temperature is between 90 and 100 degrees centigrade and materials of the new element are inexpensive. They wish to reduce the production cost of the element to one tenth of the production cost of the existing elements, and plan to utilize it for waste heat lower than 150 degrees centigrade.

Panasonic developed a thermoelectric conversion tube made of bismuth telluride that can be installed on the piping of refuse disposal facilities. In the experiment conducted in a refuse disposal plant in Kyoto, the company successfully generated more than 400 W per cubic meter using heat as low as 80 degrees centigrade. This is eight times more electricity generated by the existing technology and two times more electricity generated by photovoltaic generation per installation area. Currently, 70% of heat generated in a refuse disposal plant is discarded, but Panasonic’s technology can theoretically utilize 1 percent of the discarded 70% for generation. Panasonic plans to review material cost and production process to reduce the cost per generation to make it cheaper than photovoltaic generation. Please click here for further information on Panasonic’s thermoelectric generation.

Posted by Senryaku-kenkyu at 6:45 AM No comments:

No. 824: Utilizing big data for the prevention and treatment of diseases (January 6, 2014)

Technology:
Toshiba will start a project to utilize big data for the prevention and treatment of diseases in alliance with Tohoku University. They will collect data on daily life, such as diet, exercise, and sleeping, of individuals with the help of a sensor to be ingested and attached to the body, and manage the collected data in an integrated manner through cloud computing. Medical doctors will utilize the collected data to improve their advice on the lifestyle habit of patients, and pharmaceutical companies and food companies will make the best use of them for the development of new products. A business model based on the collected data will be built by the joint efforts of the public and private sectors with an aim to decrease healthcare cost, and the model will be exported to foreign countries.

Toshiba has a highly advanced technology in the micro electronic mechanical system (MEMS). Utilizing its excellence in this technology, the company plans to develop sensors that can be put in a wrist watch and swallowed with food. The sensors will detect a germ and a symptom of disease that causes an infectious disease from urine, sweat, and saliva. They will make it possible to monitor the health condition in the daily life around the clock, without relying on health examination and medical records. Nihon Kohden that is a leading medical device maker and other universities will participate in the project to be subsidized by the country. The project will start within 2014 with a total of several hundred participants that include Toshiba’s employees and staff members of Tohoku University.

Posted by Senryaku-kenkyu at 12:57 AM No comments: