Toyota’s fuel cell vehicle Mirai (the future) was put on the market on December 15, 2013. At present, only several dealers display a Mirai and customers have to wait for one to two years to take delivery because production is limited. The planned annual production is 700 units and planned annual sales target is 400 units. Reportedly, Toyota has already got an order for 1,000 units. You can buy a Mirai for about 5,200,000 yen with a subsidy form the government. The key to the spread of fuel cell vehicles is the accessibility to a hydrogen station. Although there are only two hydrogen stations at present, 43 stations are scheduled to be constructed with a subsidy from the government.

JX Nippon Oil and Energy will build 10 hydrogen production bases toward 2020 to supply hydrogen across the country through its 2,000 gas stations. It will apply new technologies to reduce the production and transportation costs to less than half. It plans to develop a new technology to produce hydrogen at a low cost toward 2018. Hydrogen is recovered from oil, natural gas, and exhausted gases, and catalyst is used to recover hydrogen from exhausted gases. The new technology is expected to increase the recovery rate from the present 70% to 90%. At the same time, it will put a new technology to transport hydrogen at normal temperature and normal pressure into practical application with a view to increasing the transportable amount per lorry by 2.5 times. Tokyo Gas opened its hydrogen station available for general customers on December 18, 2013 in Tokyo. The market of fuel cell vehicles is estimated to grow to 400,000 units toward 2030.

Posted by Senryaku-kenkyu at 7:09 PM No comments:

Technology:
Semiconductor Energy Laboratory has developed a bendable lithium-ion battery. It is about 2 mm thick, and it employed highly flexible materials for both the positive and negative electrodes. Its shape can be changed freely: from a nearly flat shape to a curved shape. The exterior made of aluminum has very tiny irregularities to increase retractility. Lithium cobaltate is applied to an aluminum foil to build the positive electrode, whereas carbon is applied to a copper foil to build a negative electrode. The two electrodes are piled vertically. When the bendable battery is curved, tensile force is applied to the upper side and compassion force is applied to the underside. The irregularities on the exterior allow the exterior to expand and contract, and thereby they absorb pressure not to cause any cracks.

After bending the new lithium-ion battery for 10,000 times, the research team confirmed that neither the charge-discharge performance nor the exterior was damaged. It is planned to incorporate the new bendable lithium-ion battery in underside of a wrist watch type terminals and in the temples of glasses. Because terminal manufacturers can get a high degree of freedom in product designing, negotiations between Semiconductor Energy Laboratory and terminal manufacturers are reportedly under way. 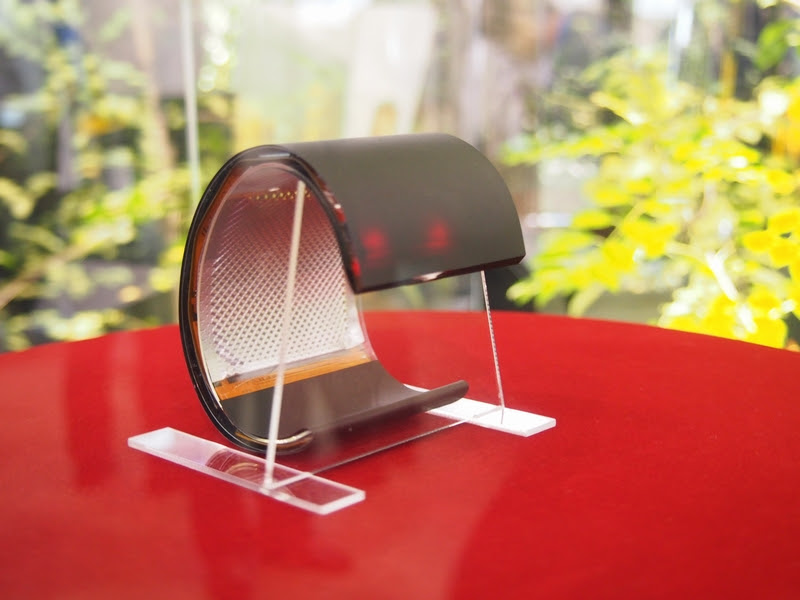 Posted by Senryaku-kenkyu at 12:14 AM No comments: