Business trend:
Marubeni got an order for 52 railway cars for about 12 billion yen from Venezuela in alliance with Toshiba and Nippon Sharyo. They will be for the existing lines in the suburbs of it capital Caracas. Toshiba will be responsible for electric control, and Nippon Sharyo takes care of cars. All the 52 cars will be shipped from Japan toward mid-2015.

Marubeni got an order for the renovation of the 42-km line between Caracas and neighboring cities in alliance with Italian and Venezuelan companies in 1992 and 2004. Venezuela National Railway has been considering purchasing new railway cars to mitigate the congestion. In Venezuela, traffic jam is growing serious with the inflow of people to such big cities as Caracas. The government is in the middle of the project to improve a total of 13,000 km railway networks. Traditionally, France is dominant in the railways business in Venezuela, but Japanese companies successfully secured an order for the 52 railway cars. An image of the railway car to be shipped to Venezuela 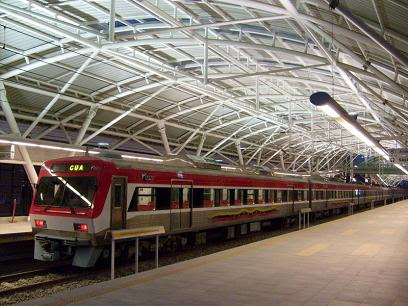 Posted by Senryaku-kenkyu at 12:08 AM